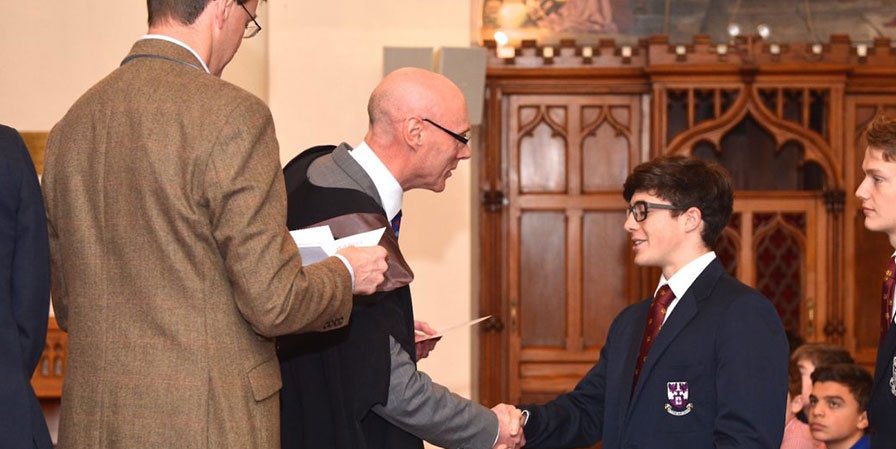 Before lunch on Wednesday October 27th the Boys’ Chapel was packed for the second Headmaster’s Assembly of the year. After the opening prayer by the Rector, Fr Michael Sheil, the Headmaster, Mr Chris Lumb took to the podium to recognise some of the achievements of our students in recent weeks. As the first half term (by some way the longest of the academic year) draws to a close he remarked on how very busy and successful it had been and also hoped that all the new arrivals, in Elements and elsewhere, have settled well into boarding school life.

Mr Lumb went on to speak about the Headmaster’s Reports, the second set of which will be completed this week. He urged the students to look at them carefully as they provide very good feedback on their progress on a regular basis. For Grammar and Rhetoric in particular they are the clearest evidence of their progress towards their target grades, while for all years they are an important indicator of diligence, regardless of grades attained.

He announced that, after each set of reports, he would recognise diligence at a school gathering in the Boys’ Chapel. This first set of place card certificates presented are to the boys who achieved the highest average diligence marks on their first set of reports in September. Next time he will recognise the boys who have shown the biggest improvement in their diligence between their first and second set of results.

Mr Lumb was pleased to announce that 16 Leaving Cert Papers had been upgraded on appeal, including seven in Agricultural Science and three in German. Donnchadh Walsh’s upgrade to A1 in Mathematics meant that he scored 625 points, as a result of which he has been awarded a prestigious Ad Astra Scholarship presented by UCD to students with 6 A1s in their exam.

Turning his attention to college applications, the Headmaster urged Rhetoric to make sure they are engaging fully with the serious decision-making required in the CAO course choices. He noted that there is also quite a large cohort making applications to the UK and one or two to the US, which involve a different application process including a personal statement, school reference and – sometimes – an entrance test or interview.

Mr Lumb then spoke of the rugby season, which is well under way and has already yielded some success (Mr Pat Kenny’s full report is available here). Elements had a winning start away to Castleknock, St Gerard’s and Newbridge before pulling on the purple and white jersey at home for the first time against the visiting touring side from England, Danes Hill in Surrey, where the As and Bs both recorded comfortable wins (in the presence of former Liverpool and England player Jamie Redknapp, whose son was playing for the touring team). Meanwhile the Transition Year team have progressed to the quarterfinals of their league while the Seniors defeated Roscrea, thus gaining some solace for last year’s defeat in the SCT quarter final against the same opposition.

The Headmaster then announced this year’s Senior Rugby Panel Captain and Vice-Captain, Sean McCrohan and Dan Sheehan and congratulated to the following boys on their selection for Provincial and International representative sides:

Mr Lumb, who delights in the click of willow against leather “as the run stealers flicker to and fro’”, was pleased to announce that we shall be installing some indoor cricket nets in the Sports Hall shortly, and replacing the outdoor wicket for the start of the season next year. He congratulated Calum Dowling (Grammar) for scoring a century (100 runs) earlier this year – a rarity in itself and doubly so in the schoolboy game.

We had boys competing in the Round 2 of the Three Counties cross-country event in Newbridge last week, including two strong finishers in Andrew Hanley and Robbie Savage (13th and 16th respectively). In the Juniors Michael Spillane came home in 2nd place overall winning the silver medal in addition to finishing 4th the previous day in the Leinster Schools event.

The Clongowes reading community was recognised at the Well Read National Award event earlier this month. Ms Jane O’Loughlin submitted a portfolio in May setting out our various reading activities, initiatives, promotions and events throughout the year. We were one of just 33 schools from across the country to receive such an award- affirmation that a strong reading culture has been established in Clongowes. The award was presented to the Headmaster by Aidan McNeill and Luke Johnson (Rudiments), Ethan O’Loan and Julian Jimenez Ospina (Grammar) and James Lambe (Rhetoric).

The Headmaster extended congratulations to the boys in Poetry for their excellent fundraising efforts during their time in Transition Year. Last month a large delegation travelled to Crumlin Children’s hospital to present a cheque for €70,000, with outgoing Year Captain, Daniel Beggs, along with David Broe and Ronan Molony, speaking on behalf of the boys involved in the fundraising.

The Headmaster closed by reflecting on our recent Open Day, which was a great success, and thanked everyone involved: boys and members of staff. Very good numbers of prospective boys and parents attended and there was much positive feedback, including one boy who had left home on Saturday morning complaining that he didn’t want to go to any boarding school only to be converted to Clongowes by the reception he had received on the day.