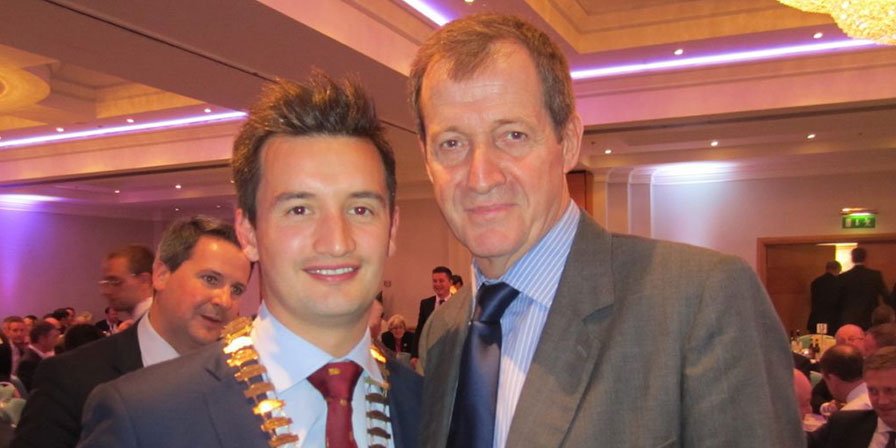 While Virgil’s Aeneid (and its immortal opening phrase that sings of arms and the man) was composed more than two thousand years before Alastair Campbell addressed the Fourth Clongowes Business Lunch in Dublin last Friday, the themes addressed by both men are timeless and have much in common…

More than 250 souls – mostly Old Clongownians – packed into the Conrad Hotel in Dublin to hear the often controversial and always entertaining Mr Campbell deliver a robust and thought-provoking critique that challenged his audience to look long and hard at the current political situation worldwide and its implications for the future. After the Rector, Fr Michael Sheil SJ, had effortlessly stilled the room and said grace, the assembled diners tucked into a fine lunch before the improbably boyish looking President of the Union, Andrew Lynch (OC ’04) introduced the star attraction.

Starting with a wry, self-deprecating nod to his own role on the ill fated Lions tour in 2003 (and accepting that he was easily the worst player not on the pitch), Alastair quickly moved to a thoughtful and wide-ranging survey of the state of play in the more serious arena of international affairs. Citing the examples of Donald Trump. Vladimir Putin, Marie Le Pen and Jeremy Corbyn, he mused on the increasing polarization of politics around the world, the conspicuous absence of reasoned debate and the tyranny of social media in any discussion that does take place.

Moving closer to home he said that he feared for the United Kingdom in a post-Brexit world and urged Ireland – and Irish politicians in particular – to become more involved in finding a solution to that particular political mess. Saying that the job of politicians is to lead he confessed to fearing the anarchy of opinion in the absence of any genuine and courageous leadership. The session concluded with a lively question and answer session that ranged across many topics (including arms and the man) but Alastair – a veteran of several Leveson Enquiries – was neither bloodied nor bowed as he stuck staunchly to his guns throughout.

Returning to the theme of courageous leadership he closed with a thoughtful tribute to the work of Fr Peter McVerry SJ and the charity he set up to reduce homelessness and to address the harm caused by drug misuse and social disadvantage. Fr McVerry (OC’62) has been working with Dublin’s young homeless for more than 30 years and, in 1979, he opened a hostel to provide housing and support for them. Alastair urged us both to change our perception of the homeless in society and also to dig deep to contribute to the trust, which was the designated charity on the day.

Started with a view to increasing the opportunity for Old Clongownians to network, this series of Business Lunches has been a resounding success from each of a networking, entertainment and fundraising perspective. Conceived by the Union Committee, and organised by Master of Ceremonies Paul Maher (whose event management company, Quality Events provided their services for free) and Andrew Lynch, this year’s event drew a strong response from across the generations, and was a sell-out well before the day.