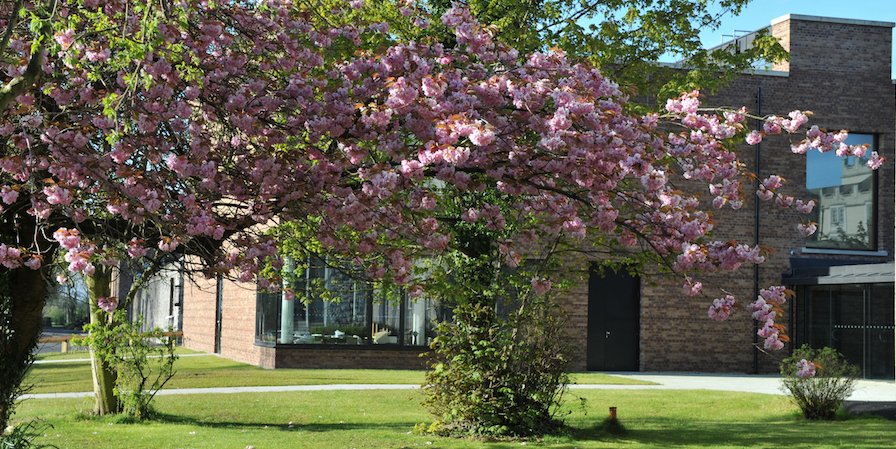 The Clongowes Foundation welcomed over sixty OC’s with their guests to Hallam Conference Centre on April 7th last. Nick Hewer OC’62, famous for his role on the BBC’s programme The Apprentice, interviewed William Sargent OC’73 – a man typically not interested in accolades or even attention.

William arrived to Clongowes at age of tender age of 11, arriving from Brazil where he had grown up. Whilst his parents were Irish, William’s first language was Portuguese on arrival in Clane.

‘The Jesuits gave me the tools to think for myself’. An entrepreneurial spirit was initiated in Clongowes (as much by activities of his contemporaries as of himself) and then realised in Trinity College where an active business, renting the same PA systems for lunch-time gigs in the Baggot Inn, to five o’clock gigs and then again at ten in the evening financed student life whilst gaining a Business and Law degree. The 1980’s, an exodus period for Irish graduates, saw Sargent locating to London which remains his base. The PA rental system as business model thrived in London but it was the growth of the PC market in the early 80’s that generated the spark which became Framestore  –  computers facilitating animation.

Sargent founded Framestore in 1986 with three creative partners. He has directed its rise from an award winning commercials house to a world renowned, Academy Award winning, film VFX company based in London, New York, LA and Montreal. Framestore has worked on an array of movies such as the Harry Potter series, Alfonso Cuarón’s Gravity  and Paul King’s Paddington to name but a few. Equally at home in Hollywood and Government he was Permanent Secretary, Regulatory Reform at the Cabinet Office, Board Director of HM Treasury, and a fellow of the Royal Society for the Arts. He was knighted by Queen Elizabeth in 2008.

‘My Role as MD of Framestore is about pulling the finance together along with overall strategic planning. I make that part happen. My founding pals were the creative practitioners. We all admired and respected each-others skills. Partnering with the right people, facilitating world-class creatives marks our practice. Mutual respect, self confidence in our own skills meant that we didn’t mind challenging each other’.

Sargent refers to his leadership style as ‘delegation’.’ I set goals with our managers. Then they know where they are going. I choose people and I trust them, I believe in them. We work in an industry that is moving so fast in a city that has top global creativity. What is ground breaking this year in computer generated imagery (CGI) is yesterday’s work six months out. This is science and art, within creativity’. Nick Hewer humorously referred to Williams’ decision-making reputation as notoriously ‘dithering’. However Sargent set the record straight by clarifying that he deliberately doesn’t want to be rushed into making decisions that he doesn’t want to make at the time. He believes that decisions often emerge. ‘Wrong decisions can cost you – fortunately I have people who are extraordinarily good at problem solving’. In hindsight another Jesuit learning perhaps.

To close and before questions opened to the floor William Sargent and Nick Hewer agreed ‘indeed Clongowes defines who you are’.

Martin Nugent and Michelle Burke representing The Clongowes Foundation were delighted to welcome so many London based OC’s. A special thanks to Dermot Waldron OC’78, MD Cavendish Conference Centres London, who very generously supported our event by hosting the evening in his wonderful venue. Feedback from those present, ranging from OC’56 to OC’09 was entirely positive. We look forward to hosting our next Clongowes London Leadership in 2017.