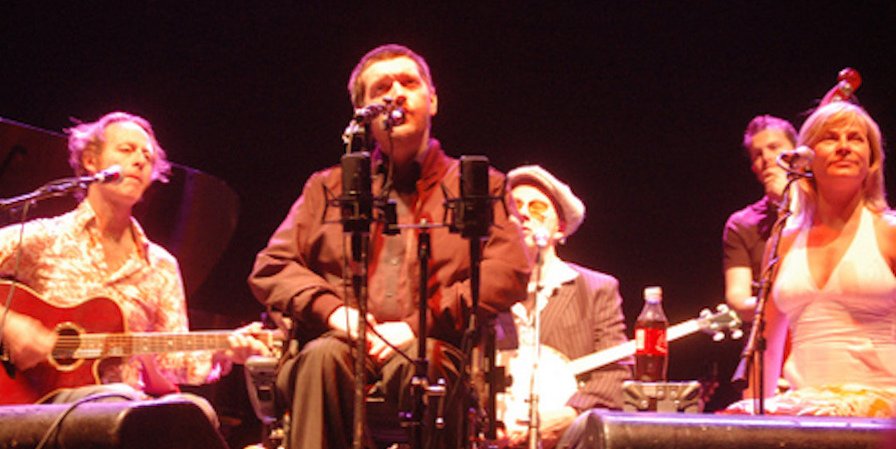 In 1981 we arrived in Clongowes straight out of college with wonder in our eyes. We came in from the east and settled and remained there for five wonderful years in wonderful company. One of the second year pupils was an ascetic looking kid named Fergus O’Farrell. Although tiny in stature he was a giant inside and a powerhouse of talent bursting to transcend his physical disabilities and soar with the eagles.

You see Fergus suffered from Muscular Dystrophy, and by rights should not have lived much beyond his 25th birthday. But that frail frame topped off with a shy, wry grin contained a colossus that would live another 23 years and leave a body of work of words, music, art and love that would deeply touch the lives of all who knew him and leave us with a bequest of recordings and paintings that will be his legacy in years to come.

Fergus’ physical challenges brought out the latent Christianity in his peers in the class of ’86 as they helped him move around this big, old school that was built in an age when access for the disabled wasn’t even a distant ideal. We used to see the boys helping him up the stairs to the dorms, into the buses to go to cup matches and onto the stage of the old (much missed) concert hall that he might share his musical talent with a school community that may not have realised how lucky they were. When he won the Aloysius Award for courage and determination, his wing-man, Malcolm MacClancy gave him a piggy-back up to the stage in the old ref’ and there wasn’t a dry eye in the school.

By happy chance the ‘live-in’ teachers quarters were directly above the room that Fergus used to practice piano and we can still recall being entertained by him while we corrected homework during evening recreation. We gradually got to know one another and to trade music – our David Bowie for his Waterboys. And we got to hear new stuff too – Musica universalis: the music of the spheres.

They’ll try to tell you that Fergus only formed his band Interference after he left school; don’t let them. We recall them playing in the school concert in 1984, and it was good. His loyal sideman was fellow Clongownian, James O’Leary (on guitars), while Beckett-Joyce valedictorian and poet, Malcolm MacClancy provided some pretty nifty lyrics (check out ‘Wild Bill’s Circus Scene’ or ‘Vinegar Girl’ on the eponymous first album to see what we mean).

We stayed in touch intermittently after he left school and have fond memories of gigs in ‘An Béal Bocht’, Mother Redcap’s, The Lobby Bar in Cork (most recently) and that wonderful night in Vicar Street in 2003 when the stars aligned and other stars came out to play with – and pay tribute to – Fergus: Glenn Hansard, Gavin Friday, Mannix Flynn, Maria Doyle Kennedy, Liam Ó Maonlaí and Iarla Ó Lionáird for example.

And Fergus walked on water.

Inevitably, with the music playing behind us now as we type, we look for meanings in the lyrics that might comfort us. Even though the scarily prescient ‘Vaj, Vaj’ speaks of ‘The body’s slow decay… you cannot stop the time nor the rain’ we prefer to remember him as he saw himself, as a ‘Wild cat strutting thing; Pride of lions feeding thing; A history of hearts loving thing’.

When we heard John Creedon play ‘Gold’ last night we thought nothing special of it until he said that it was in memory of Fergus, to whom he paid generous tribute. We were shocked (we were – really) and not ashamed to say that we shed a tear. The accolade was repeated later on Lyric FM in ‘The Blue of the Night’ and we shed another.

We had intended to visit him in Schull last August to interview him for the 2016 Clongownian, which would have marked 30 years since he left school. That’s not going to happen now to our great regret. We’ll just have to console ourselves (as will all who loved him) by listening to the albums.

‘Gold’ from the award-winning movie ‘Once’ contains more of the wild cat strutting thing rattling his chains defiantly and raging:

Hell I’m gonna be me.

And staring out to sea.

Walk on Ferg. And keep on shining

This morning Fergus was the subject of a Morning Prayer led by the Assistant Headmaster, Mr Martin Wallace and you may read it here.

The media have been fulsome in their praise of Fergus and you may sample some of the accolades here: