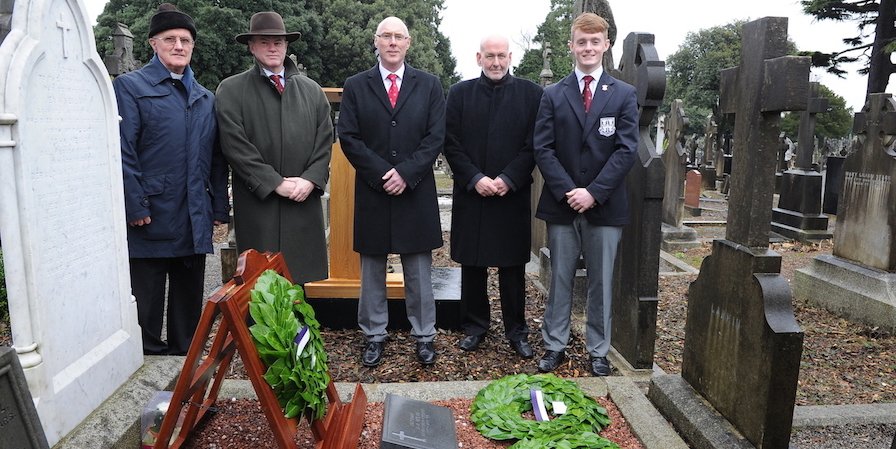 Pathetic fallacy abounded as we commenced our 1916 Remembrance last week (31st January) in a blustery Glasnevin Cemetery with an inclusive ceremony that commemorated the lives and deaths of three Old Clongownians, who were involved in the insurrection that year. A large crowd comprising members of staff (past and present), alumni and parents joined the Rector, Fr Michael Sheil SJ, the Headmaster, Mr Chris Lumb, Chair of the Board of Management, Mr Peter Gray, the President of the Clongowes Union, Mr Owen Binchy, members of the Jesuit Community and representatives of the student body at the event. (Pictured above are Fr Michael Sheil, Mr Owen Binchy, Mr Chris Lumb, Mr Declan O’Keeffe and School Captain, Conor Slattery at the graves of Gerald and Arthur Neilan. More pictures here).

Following an introduction by the College Archivist, Ms Margaret Doyle, Peter Gray welcomed everyone and thanked those who made the day possible especially Margaret Doyle and John Green, Chairman of the Glasnevin Cemetery Trust. He set the scene in its historical context and remarked how – with the benefit of time – we can look back through the fog and see the bravery, the poignancy and the humanity of what took place, and remember and respect all who participated.

Fr Sheil delivered a Homily in which he hoped that Clongowes Founder, Fr Peter Kenney SJ, feels that successive generations of our students have fulfilled his hopes as leaders. He noted that – in the complex reality of the ever-changing society and worldwide challenges – they did not always find themselves in agreement with each other, but that they were always true to their striving for the magis – the greater good according to their personal convictions. He prayed that the Neilan brothers and The O’Rahilly may inspire us to be true to each one’s calling as we strive, like them, to make the world a better place.

Historian (and Old Clongownian), Dr Harman Murtagh spoke of the life, achievements and untimely death of Michael Joseph ‘The’ O’Rahilly, who played a significant part in the opening drama of the Irish Revolution, which resulted in the foundation of the state and ultimately led to the Irish Republic. He told us that ‘The’ O’Rahilly was a brave man, decent, honourable, highly principled and patriotic; romantic in outlook – somewhat quixotic perhaps – but this was in keeping with the whole 1916 venture.

After the formalities, refuge was sought in the welcoming surrounds of the Glasnevin Heritage Centre, where the Headmaster, Mr Chris Lumb spoke of the importance of the occasion and the sense of pride that it instilled in those present as well as the wider Clongowes community. He thanked everyone for their contributions and attendance on what he said was his first experience of a ‘soft’ Irish day.

John Green, Chairman of the Glasnevin Cemetery Trust (whose son James, graduated from Clongowes in 2013) told us that the event was the first in the programme being run by the centre to commemorate 1916. He then presented the Headmaster with a biography of Daniel O’Connell and brought proceedings to a close. Light refreshments followed and – despite the somewhat sombre occasion – it is fair to say that a good time was had by all.

In 1914 many Old Clongownians responded to the urging of John Redmond and played a prominent role in the Irish contribution to the Allied effort in World War I. These men and their peers saw themselves fighting for Ireland as did the Clongownians who took part in the Irish Revolution and the ensuing tragic Civil War. Next year Clongowes will remember three Old Clongownians who fought in Dublin during the 1916 Rising, two of whom were killed.

One distinguished Old Clongownian, Michael Joseph ‘The O’Rahilly’ (OC 1893), a founding father of the Irish Volunteers, was killed during the Easter Rising, leading a charge, sword in hand, with the same reckless courage that Thomas Francis Meagher (OC 1839) had shown at Fredericksburg during the American Civil War.

In addition to ‘The O’Rahilly’ we lost Gerald Neilan (OC 1898 – 10th Battalion, Royal Dublin Fusiliers), who died from a sniper’s bullet fired from the Mendicity Institute. Gerald had been ordered to relieve Dublin Castle as part of the 10th Royal Dublin Fusiliers and he was shot as he crossed the Liffey.

Poignantly, Gerald’s brother Arthur Neilan (OC 1913) was part of the Four Courts Garrison under Ned Daly and he was transported to Knutsford Detention Barracks on May 1st 1916. Arthur went on to serve with the 4th Battalion Dublin Brigade in the War of Independence and remained with the army during the Irish Civil War.

Now and in time to be,

Wherever green is worn,

[All] are changed, changed utterly:

A terrible beauty is born.