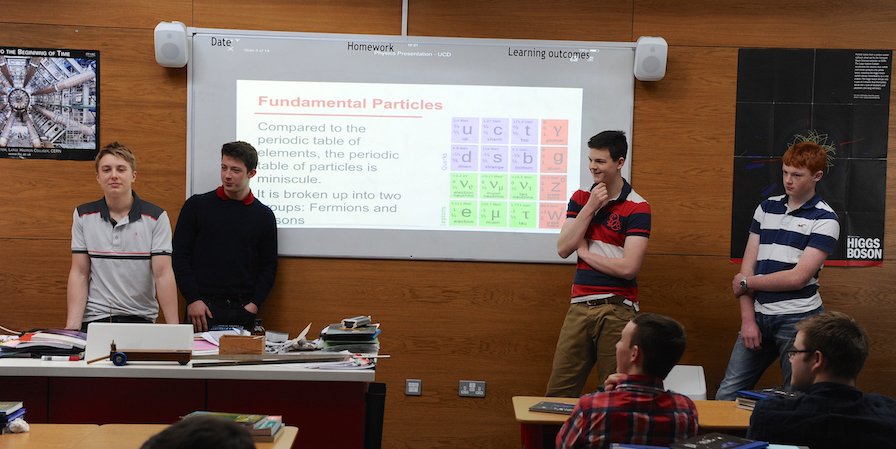 Warmest congratulations to Sean McMahon, who has been provisionally accepted to attend Gonville and Caius, the fourth oldest surviving College in the University of Cambridge. Sean, who was awarded one of ten places on offer from a group of three hundred original applications, hopes to study Natural Sciences there. He travelled to Cambridge for interview last December, and this, combined with his personal statement, secured the offer of a place subject to his Leaving Certificate results.

At present Sean, a recipient of an Alberto Hurtado Bursary in Clongowes, is considering specialising in Astro Physics, and he will be going to the right place as the college has produced no fewer than thirteen Nobel Prize winners, including Sir James Chadwick, discoverer of the neutron and Sir Howard Florey, co-discoverer of penicillin. It is also the alma mater of John Venn, inventor of the eponymous diagram and the physicist, Stephen Hawking.

News of this development will not surprise those of us who have been following Sean’s career at Clongowes with interest and who recall how he, along with Frank Keating and Donnchadh Walsh were identified by the State Exams Commission as high achievers in Maths and Science in their Junior Certificate examinations, as a result of which they invited to compete in the Irish European Union Science Olympiad.  All three have been stalwarts of Mr O’Hara’s Mathematical Modelling project and last year Frank and Sean (pictured above, on the left, with Donnchadh and Michael Binchy) travelled to University College Dublin to take part in a CERN Particle Physics Masterclass where they successfully rediscovered that damned elusive Higgs Boson Particle (see The Clongownian, 2015, p.196 for more).

Congratulations also to all those who prepared Sean for his interview: Mr John Conway, Mr Stephen O’Hara and Mr Michael Quane and to all his teachers for their work in helping him to get this far.  In a nice coincidence, Gonville and Caius was also attended by Harold Abrahams, the Olympic sprinter immortalised in the film ‘Chariots of Fire’. Sean is no mean athlete himself and so we wish him well in his own quest to strike gold next year.