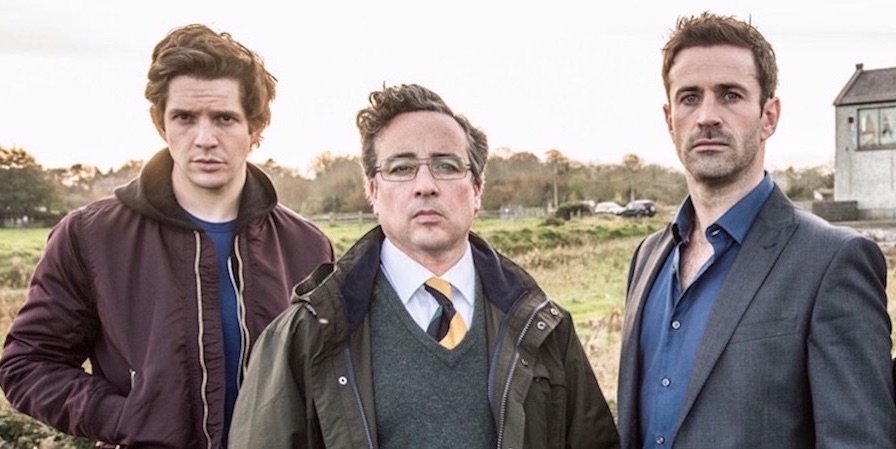 Last Sunday (September 27th) saw the launch of a new crime drama series, Clean Break on RTEI, featuring not one, but two of our past pupils in starring roles: Adam Fergus (OC’98) in the main role of a beleaguered businessman / kidnapper and Damien Molony (OC’02) as the failed boxer turned henchman (Damien left and Adam right above).

Unlike its predecessor Love Hate (in which Adam also appeared) Clean Break deals with white-collar crime and a tiger kidnapping. Set on the mean streets (and country lanes) of Wexford the show comes from the pen of local man Billy Roche (readers of a certain generation will remember his contribution to Ireland’s New Wave movement at the helm of The Roach Band in the 1970s).

The continuing success of Adam and Damien must be particularly pleasing for their erstwhile director Mr Martin Wallace (of this parish) who gave them their first breaks on the stage of the old theatre (of both dreams and fond memory) in The Quare Fella and Twelve Angry Men respectively.

Were that not enough…

In a neat coincidence Clean Break opened the same weekend as the prestigious Dublin Theatre Festival, which – since 2012 – has had Willie White (OC’88) at the helm as Artistic Director and Chief Executive. Meanwhile Richard Flood (OC’01) continues to portray a conflicted Garda Siochána twice a week in the very successful crime drama (what else?) Red Rock on TV3.

Adam, Damien, Willie and Richard are merely the most prominent and immediate of our past pupils who have made a living for themselves in the precarious world of acting (and directing). For the Jesuits who established Clongowes, drama was a central feature of school life and play-acting another activity for the greater honour and glory of God. Drama was an integral part of the curriculum from the earliest days, when plays were produced at Shrovetide and Christmas. The old theatre saw such luminaries as Home Rule leader John Redmond (OC 1874) tread the boards as both Macbeth and Hamlet, while James Joyce (OC’1891 – the greatest Irish writer never to win a Nobel Prize) once appeared in The Mikado (appropriately cast as an imp).

In a school that is better (and rightly) known for its successes in the oval ball game, it is instructive to note that we have produced more professional actors than professional rugby players. Watch this space for an opportunity to catch our latest crop of thespians when our latest successful director, Mr Tom Carroll unveils the latest Rhetoric Play in the Sports Hall next November.

Roll over James Joyce and tell John Redmond the news…

For more on these stories see earlier issues of Clongowes Digest here and here.