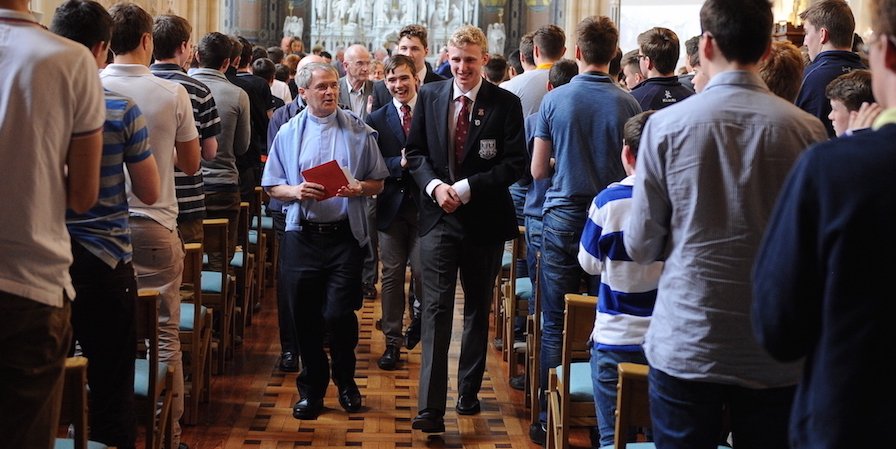 Last February, after eleven years in the position, Fr Leonard Moloney SJ announced that he would be stepping down as Headmaster of Clongowes Wood College in August and last Wednesday it came to pass…

In a letter to parents Fr Moloney said: ‘Having served for almost eleven years, I will be leaving with not a little sadness and with great memories as I move on from what is a great community of people’. As there is currently no Jesuit available to take his place due to the fewness of vocations over recent decades the next Headmaster will be a layperson (Mr Chris Lumb, of whom more anon…). Fr Moloney noted, however, that the Jesuit commitment to the College is unchanged as this school holds a very special place in the heart and mind of the Province.

Fr Leonard Moloney arrived in Clongowes in 2004 as the sixth Headmaster since the establishment of the office in 1971. He had just completed a sabbatical following a hugely successful eleven years as Headmaster of Belvedere College and that time out would prove very necessary as he prepared for the task of leading Clongowes towards its Bicentenary. Leonard’s drive and vision have been instrumental in bringing about the changes, some obvious, some less so in the material and spiritual fabric of the school.

The development of facilities such as the James Joyce Library and Science, Art and Technology Building attest to the former, while the latter may be seen in his commitment to the development of Ethos and Liturgy in the school. This is evident in initiatives such as the establishment of the Ethos Department and the Alberto Hurtado Bursary Programme. Both strands of his legacies combine pleasingly every Sunday morning in the reimagined Sports Hall (another of his works) when it is transformed into a sacred space for worship. Thus is the physical development of the school mirrored in the spiritual development of its pupils and past pupils so that in Leonard’s words they ‘will leave the world a better place for having lived amongst us.’

We do not have enough space here to do justice to Fr Moloney’s legacy and a fuller assessment and tribute will appear in the next issue of The Clongownian later in the year, but it would be remiss of us not to mention, what the School Captain, Jack Gillespie, speaking on Union Day called his ‘constant pursuit of excellence and accuracy’ in all that he does. Mr Martin Wallace has referred to ‘his extraordinary commitment to the Church – a commitment that has never wavered. His devotion to the school and all its activities be they academic, cultural, pastoral, religious or sporting bespeaks an enormous energy and passion that will be missed. His concern for the ongoing development of the college is allayed somewhat by his creation of The Foundation, the remit of which is to provide for the ongoing development of the school campus.

Leonard, an innately modest and humble man, may well be embarrassed to read these words, but they are heartfelt and accurate. He will be missed by students, parents and staff alike – people with whom he had an easy and sincere rapport. Clongowes will live long after Leonard, but much of its future will be thanks to him. In words that were written for another visionary, the architect, Christopher Wren: Si monumentum requiris – circumspice: if you seek his monument – look around you.