Welcome to the Holodeck 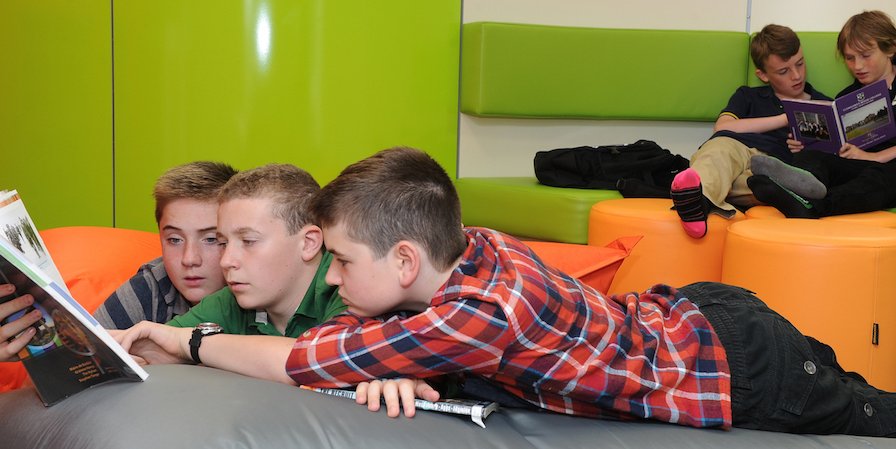 From the Campfire to the Holodeck

It is entirely appropriate that the new Cooperative Learning Centre is the result of a collaborative process. Last year, I began by bringing Elements students out of morning study to an under-utilised space with very little to recommend it other than its availability. They needed little encouragement to work in groups; it came naturally to them. Patricia Frampton, Head of Learning Support, became involved, then Amelie Ghesquiere and Denis Gibbons, who had recently completed his Masters on cooperative learning. Denis introduced a structured approach to cooperative learning with last year’s Rudiments. Trish brought his methodology next door to Elements, and so a process began.

Having seen the energy and enthusiasm with which the boys engaged with cooperative learning, we took the obvious step of inviting the customers to design the learning spaces. In thirty minutes, they came up with a design that corresponded with much of what the educationalists recommend for such learning environments. With the support of the Headmaster and approval for the budget from the Board of Management, a brief was prepared for Ms. Helene Broderick, who had re-imagined the Concourse in a very creative way. Helene took the brief and turned it into two ideal imagined spaces.

We were fortunate to have as the contractor, Mr. Dave Walsh whose task it was to convert these nondescript spaces into beautiful rooms that responded so well to the imaginative furniture. Dave’s attention to detail and scrupulous worksmanship contributed hugely to the finished product. Radiators that had no business being spared from the skip became admirable features after his work was done. The windows that were dull and lifeless became expressive eyes overlooking the room. It was a pleasure to work with Helene and Dave whose passion for delivering a quality product matched ours… and we managed to stay very close to our budget! 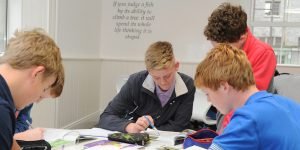 The cooperative learning environment differs from the conventional study in that the students work in groups, are allowed move around, have greater autonomy in their learning, and can be noisy at times (usually evidence of activity). Also, they are allowed and even encouraged to use technology as an educational tool.

There is a need for the conventional study environment as part of a balanced menu. In From the Campfire to the Holodeck, Richard Thornburg explains that the cave has just as important a role as the campfire and the holodeck . The campfire is the classroom where the teacher generates the idea for learning. The cave is the place where the student researches the idea. The holodeck is where he puts his thinking into practice. 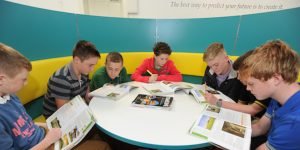 The boys coming from primary school are accustomed to learning actively in groups and doing homework under some level of supervision. They arrive into Clongowes where they are obliged to spend much of their time in the conventional cave space. Although we have made significant efforts to diversify the study environment in recent years, the latter arrangement belongs to the utilitarian concept of education that evolved during the industrial revolution. In that scenario, information and its retention had a high currency; in today’s world, information is the most easily-accessed product in the world. Creativity and thinking skills must be the priority in a modern educational environment. According to many modern thinkers, the information revolution is already over.

We are now in a new age, which Daniel Pink has called the Conceptual Age, the age of ideas and innovation. It makes sense. One way or the other, we need to prepare our students to be actively engaged in their learning and to be creative. It doesn’t mean that knowledge is no longer relevant, but the way we access knowledge and retain it must be informed by the availability of technology. The ultimate goals of wisdom and the characteristics of Jesuit education will not be delivered by technology or methodologies, but the spade work can be made less onerous. To continue the metaphor, it makes no sense to use a spade to dig a field if you have a JCB in the garage.

The new Junior Certificate reforms point to this different model of education, one that addresses the needs of the twenty-first century without disregarding the fundamentals of the education process: learning is a process of creative interaction with the world and with others. Students learn best when they learn together because they are more engaged when working as a team.

What is needed is the designated space, furnished and decorated in a way that reflects the personality of its users – young, energetic, creative, informal. Each space should have a feature that shouts loudly ‘LEARNING IS FUN!!!’. We hope that this is what we have created.