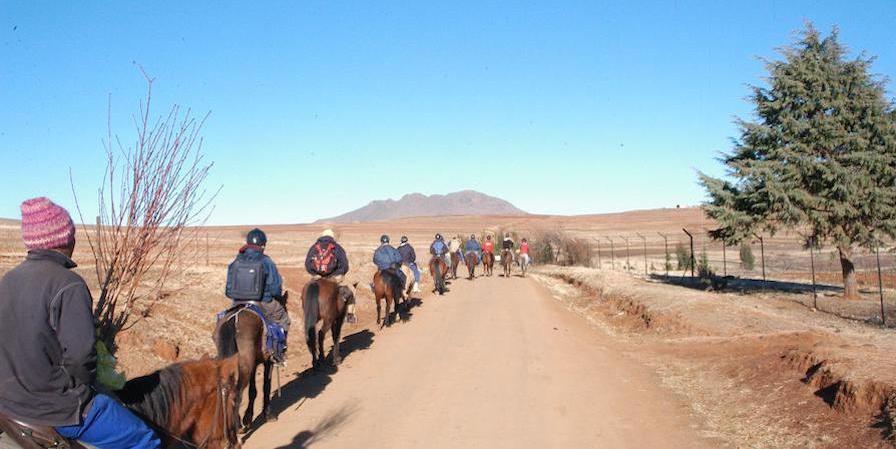 On the 31st of March a group from Clongowes began the school’s sixth Immersion trip to Malealea, Lesotho. Before the flight had even taken off we experienced our first mishap as a passport belonging to one of the boys had mysteriously gone missing only to be found in a bin a very short time before our gate closed! After that, the trip to Johannesburg, while long, was relatively uneventful. It was only when trying to get in contact with our ‘bus driver that we realised something was amiss. Unfortunately Isaac had been involved in a road accident the night before and while he was OK the ‘bus was no longer available to the tired and weary travellers. However there to meet us at the airport were South African based families the Coulter’s and the O’Connell-Hussey’s. Upon their suggestion we decamped to chez Coulter and began the efforts to source a 30 seater ‘bus to bring us to close to the boarder of Lesotho – not exactly an easy job given that it was Easter Sunday.

Eventually thanks to the unbelievable support from both families we managed to pack the boys into two jeeps provided, one apiece by each family and a ‘bus that we had managed to track down. The third leg of our journey began and, in convoy, we made our way south as we headed for the kingdom of Lesotho. After a long and tiring day travelling, we eventually reached our lodgings in Malealea where the boys ate quickly before gratefully falling into bed, as we had arrived late the generator had been switched off and so the getting ready for bed and brushing of teeth had to carried out by candle light.

Monday morning soon arrived and the group regathered and began the introductions with those with whom we would be working for the next 10 days or so. Marian Drew MD of the Malealea Development Trust (MDT) delivered a presentation to the boys and outlined the work that would be carried out during our stay. As a result of heavy rainfall in February and March, of this year, a number of crucial roads had been washed away leaving some villages inaccessible by roads. The success of the previous year’s work where many wells and ponds were built was to be further enhanced and anybody interested in horticulture was invited to help out in the research garden that the MDT had developed in order to promote keyhole gardening.

The boys were keen to get busy and as a result they were sent to work a day ahead of schedule. The work ethic and sheer determination throughout the group was excellent and commented on by all who came in contact with the group. On two occasions the boys exceeded all expectations and as a result more work had to be found to keep them busy, such was their enthusiasm. While stomach upsets are always an ongoing battle on projects like these, this year’s group had to also battle the high temperatures and blistering sun with which we were blessed during our time in the Mountain Kingdom.

No names, no pack drill

Interacting with the people of Malealea is always an integral part of this trip and thankfully all the boys availed of the opportunity to visit and stay in the homes of the local Basotho people, an experience that will remain with the boys for many years to come. The day following the overnight stay a selection of Clongowes staff and students took on the Malealea XI and for the first time in six years the Clane side snatched victory despite two first half penalties awarded to the home team by the referee. No names, no pack-drill, Stephen Murphy (Poetry).

On Sunday the 7th of April we set out for Mass to the nearby parish of St Thomas. In previous years the Mass often fell on Palm Sunday and while the mass was therefore a little shorter than previous years (2 hours 50 minutes) we did witness a wedding, 4 baptisms and what we suspect was an engagement ceremony. Like previous years we sang our songs and thanks to the leadership of Aaron Doyle we managed to somewhat entertain the congregation.

While the days were long and hot, the work hard and physical the high spirits of the 22 boys who visited Lesotho never wavered. In the words of Marian Drew, ‘this group of boys will be remembered in Malealea for many years to come; they were generous with their work, fund raising efforts and more importantly with their time in getting to know the people of our villages’.

The trip itself was certainly adventurous (and a fuller account will appear in The Clongownian) we made it back to Dublin relatively unscathed, missing just one piece of luggage that eventually turned up! There are a number of people who must be acknowledged for their efforts in making this trip possible. Thanks are particularly due to Ms Liz Griffin who, as always, was superb in her organising of this trip and Fr Michael Sheil for his splendid efforts in making sure we got to Lesotho in good health. A huge part of the immersion trip is the daily reflection meetings that take place and these would not have been possible without the huge amount of work that Fr Sheil has put into this aspect of the project. Thanks also to the Headmaster Fr Moloney for his support and constant messages of prayer and goodwill while we were away.

I would like to acknowledge my fellow leaders Mr Patrick Gorman, Mr David Sharkey, Mr James Quinn and Nurse Jetta Weld for their unwavering support during our trip. It was hugely motivating for the boys to see them all picking up shovels and pick-axes and getting stuck in. Mr and Mrs Coulter and Mr and Mrs O’Connell Hussey must also be thanked for their amazing support to us before, after and during our time in Lesotho. We would literally have been stuck without their help.

Finally I would like to thank the 22 boys who joined us on the trip to Lesotho. It has often been said that the greatest gift you can give is your time and for the 10 days that we spent working in Malealea they gave their time constantly. No job was too big or too small for each and everyone one of them to carry out. Well done!